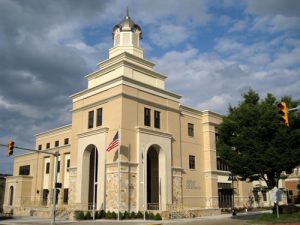 The hearing was requested by members of the Kesecker family and by Eastern Panhandle Protectors.

They and others are battling a proposed IGS Utilities Mountaineer Gas pipeline that is projected to cut through the Kesecker and other properties just north of Rt. 9 in Morgan County.

IGS Utilities Mountaineer Gas has sued the Keseckers under eminent domain to gain the right to cut through their farm.

The pipeline company’s eminent domain lawsuit against the Keseckers and other bullying tactics against local landowners has brought together a right/left coalition in Morgan County to fight the pipeline project.

In response to the request, Morgan County Commission President Joel Tuttle said that while the Commission would hear those opposed to the pipeline on August 2, the Commission “has very little say in this matter.”

“It is certainly more of a state and federal level matter,” Tuttle wrote.

But Tracy Cannon of Eastern Panhandle Protectors reminded Tuttle that early in the process, before members of the community had any information at all about the project — or even knew about it — the Morgan County Commissioner weighed in with the West Virginia Public Service Commission in favor of the pipeline.

In a letter dated May 26, 2016, then Commissioner President Brad Close wrote to the PSC that “on behalf of the Morgan County Commission” to support the gas pipeline.

Both Tuttle and Commissioner Bob Ford said they never saw the letter before it went out.

Tuttle said that the Commission urged Mountaineer Gas “to come and address the public and they were not interested in doing so.”

But Patricia Kesecker has said in the past that she insisted that the meeting with Mountaineer be public, but that the gas company refused to allow reporters in the room and that’s why the meeting didn’t happen.

The meeting before the Morgan County Commission on August 2 is open to the press and public.