TransCanada will be holding an open house at the Hancock Town Hall in Hancock, Maryland on February 9 between 6 pm and 8 pm. 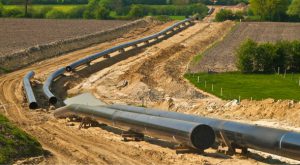 At the open house, TransCanada will give details about proposed gas pipeline project that will cut under the C&O Canal and Potomac River about a mile and a half west of Hancock.

The proposed pipeline will hook up with another pipeline across the river in West Virginia that is being proposed by Mountaineer Gas.

The Mountaineer Gas pipeline will carry fracked gas from Pennsylvania south to Berkeley Springs, West Virginia and then east to Martinsburg.

TransCanada spokesperson Scott Castleman said that “in regards to our Eastern Panhandle Expansion Project, community members will be able to view the proposed route, meet individually with members of the project team and have questions answered at our open house.”

The National Park Service has yet to approve an application for TransCanada to survey an area.

The proposal has drawn protests from residents concerned about the impact of the gas pipeline on the river and the canal.

TransCanada applied for a survey permit in September 2016 saying it hoped to begin the survey in October and complete the survey by the end of this year – and that it hoped to apply for a construction permit this month.

But the National Park Service is sitting on the application to survey and won’t say why.