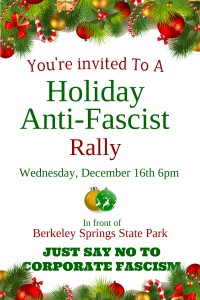 The signs will read — Fascist Free Zone, Just Say No to Corporate Fascism, Clinton Cruz Trump — Wall Street Happy, Obamacare: Brought to You By Aetna/Cigna/WellPoint,  and Export-Import Bank — Corporate Cronyism at Its Best.

The group cited President Franklin Delano Roosevelt’s April 1938 message to Congress in which he said — “The liberty of a democracy is not safe if the people tolerated the growth of private power to a point where it becomes stronger than the democratic state itself. That in its essence is fascism — ownership of government by an individual, by a group, or any controlling private power.”

“It’s not too extreme to call our system of government now ‘American fascism,’” consumer advocate Ralph Nader told Democracy Now’s Amy Goodman in 2013. “It’s the control of government by big business, which Franklin Delano Roosevelt defined in 1938 as fascism. And they control the government and turn the government to their favor — subsidies, handouts, giveaways, deferred prosecutions, non-prosecutions — and against the American people.”

Conservative thinkers like Heritage Foundation visiting fellow and Fox News contributor Stephen Moore agree with the definition of fascism as “the partnership of government and private industry for the collective good.”

“Corporate cronyism is a classic form of fascism, which would include programs like the Export-Import Bank,” Moore says.

Earlier this month, CNN national security analyst Peter Bergen asked “Is Donald Trump a Fascist?” and concluded that “Trump is a proto-fascist, rather than an actual fascist.”

“In other words, he has many ideas that are fascistic in nature, but he is not proposing violence as a way of implementing those ideas,” Bergen wrote.

But the group rallying in Berkeley Springs was more concerned with whether the American system of government was moving toward corporate fascism as defined by Roosevelt, Nader and Moore — that is, a corporate takeover of the government.