Dollar General Wal-Mart and the Battle for Berkeley Springs

If it were up to the likes of Morgan County Commissioner Bob Ford, we’d have a Wal-Mart at the north end of the county, a second Dollar General store in a rural residential neighborhood across from Union Chapel United Methodist Church and Cacapon State Park at the south end of the county and fast food joints in between. 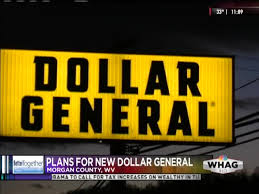 And the Morgan County Planning Commission would let them do it.

Communities around the country are fighting back against this kind of big city corporate takeover of their rural communities.

Just last month, for example, the planning commission in Lake County, California unanimously voted down the application by Dollar General to establish a store in Kelseyville.

One reason cited by the planning commission — the effect the Dollar General store would have on “the character of the town.”

Dollar General has appealed that decision to the Lake County board of supervisors.

Dollar General already has 12,000 stores around the country — and has stated its intention of opening 600 new stores this year.

Here in Morgan County, there is a growing grassroots movement to preserve the rural residential nature of the county.

In March 2015, a group of local residents filed a lawsuit against the Morgan County Planning Commission alleging that the commission’s February 17, 2015 decision to greenlight preliminary plans to put a Dollar General store at the corner of Oakland Road and US 522 ten miles south of Berkeley Springs violated its own subdivision rules and “failed to adequately establish a proper record of the information it considered when reaching its decision.”

And last week, lawyers for the residents filed a 22-page brief in support of the lawsuit claiming that the planning commission relied on an incomplete record “in a way which raises questions about whether anyone could rely upon it.”

The legal brief says that the Morgan County subdivision ordinance was adopted for a number of reasons, including “to protect and provide for the public health, safety and general welfare of the citizens of Morgan County.”

An order issued by Judge Wilkes indicates that the briefing in the case should be completed by mid-August.