West Virginia Governor Earl Ray Tomblin has vetoed SB 347 — legislation that would allowing citizens to carry a concealed weapon without a permit. 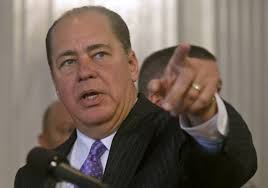 Tomblin said that under current law, “you have to have training classes and background checks — and there is a record who is carrying a concealed weapon.”

That would be eliminated under SB 347, Tomblin said.

Under the legislation, “anyone can have a concealed weapon,” Tomblin said. “And that’s what law enforcement was concerned about.”

But Tomblin said that he heard from legislatures after the vote that they too were hearing from law enforcement officials back home and were concerned about the bill.

“Even though that bill passed overwhelmingly in the House and Senate, some were squeamish about it,” Kercheval said. “They were looking to you to them off the hook.”

“That’s pretty much it,” Tomblin said.