Facing growing community opposition to a proposed Dollar General store, the Morgan County Planning Commission last night voted unanimously to postpone until February 17 consideration of Dollar General’s proposal to put a store at the corner of Oakland Road and US 522. 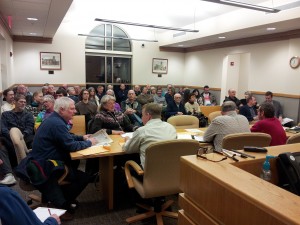 The Commission found that Dollar General, represented at the meeting by Josh Allen of Cross Development, did not give proper notice to the community about the upcoming meeting.

The proposal for a fourth dollar store in Morgan County (three already exist — a Dollar General in Paw Paw, and a Dollar General and a Family Dollar in Berkeley Springs) has drawn widespread opposition. 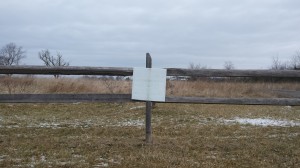 And last night, about 50 people attended the Planning Commission hearing — with many more stranded at home because of the snow sending written messages of opposition.

South Morgan residents Rita and Bob Donadieu and Frank and Catherine Rodgers attended the meeting and argued that Dollar General failed to give proper notice to the community.

Morgan County regulations require a two foot by two foot sign posted on the property 21 days before the hearing. 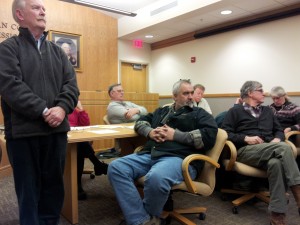 Rodgers and Bob Donadieu circulated a picture of Dollar General’s “notice” that was posted on the property.

The sign is not legible, is only 18 inches by 18 inches — not two foot by two foot as required by law, and it was not posted 21 days before the hearing, Rodgers and Donadieu said.

“When it was called to our attention, we researched it, followed up on it, we came to basically the same opinion that Frank has expressed,” Soronen said.

Before voting to postpone the hearing until February 17, the Planning Commission heard from citizens who opposed the Dollar General proposal.

No one at the meeting spoke in favor of the proposal.

Jennifer Carpenter-Peak told Allen that the community was aware that Dollar General “has massive amounts of corporate money behind them.”

Carpenter-Peak said that one of the purported business models of Dollar General is to “just plaster the area with stores and wipe out all competition.”

“We will do everything we can to stop it,” Carpenter-Peak said. “We don’t want it in there.”

Several citizens at the meeting expressed concern that their home values will be diminished if and when the Dollar General store goes in.

“I would argue that values have already been diminished,” said Rick Watson. “If dozens of requests were filed to the Morgan County Tax Office for reduced assessments, thus reducing tax income to the county, that might speak louder than all the voices in this room.”

Carol Hsu said she will not shop at the Dollar General store if it is built.

“And there are many people in the community who feel as we do,” Hsu said. “Also, the light pollution from the Dollar General already in town is offensive. And it’s on 24 hours a day. That’s something else the Commission has to consider. The commercial plat should not be approved. That land is for residential. It is not a commercial site.”

Paul Stern and Scott DuBoff argued that the burden is on Dollar General and Cross Development to show that a requested waiver is necessary to avoid an “extraordinary hardship.”

Stern and Duboff argued that despite having that burden, “there is not a single word” in Cross Development’s application to suggest that the second waiver to change the longstanding classification of Oakland Overlook as single family residential is necessary to avoid an “extraordinary hardship.”

McCuan Development Group’s Justin Cowles said that Dollar General wasn’t looking for any waivers to the permits, but just a waiver of the time frame of when to get those permits.

“I can understand, having worked  with a real estate developer and looking out at this crowd and seeing tons of opposition to a project and thinking — maybe it is in my best interest to see at least preliminarily does it have a snowball’s chance of moving forward, given all of that opposition, before I apply for those permits.”

“Those waivers are not to say — we don’t need those stinking permits,” Cowles said. “He’s only asking for a little bit of movement. He’s asking — guys, is this even feasible before I go spending however much money on engineers and applications fees and working with all these people to get the permits?”

Barb Wolfe questioned Allen about the number of dollar stores in the community.

“This is an additional store,” Allen said. “This store will reach a different market than the one here in town. Typically the travel radius of a store is not that great. That’s why there is the ability to put multiple stores in a ten mile area. In this case, it would be roughly ten miles from this store to the proposed store.”

Wolfe said that her concern was that with only 17,000 people in Morgan County, that would be the fourth dollar store.

“I find it almost impossible to believe that 17,000 people can support four dollar stores,” Wolfe said.

Ellen Lachewitz asked Allen to share the market research that Dollar General is relying on to put another store in southern Morgan County.

“The market research is something that Dollar General corporate does,” Allen said. “As a developer, we are a representative of the company, but they are also our client. There are some things that aren’t shared between both and that’s one of them. They basically tell us — that is a feasible site. And it is typically a small area. It’s not necessarily that piece of dirt. That’s the market research that we get from them. In order to share that, I would have to get it from them. If that’s possible, I don’t see a reason why we couldn’t.”

Lachewitz asked Allen whether Dollar General would be willing to meet directly with the residents of Morgan County.

“That was sort of the goal of tonight,” Allen said. “And it’s great that we had this big of a turnout so that I can make appropriate notes and hear everyone’s comments and concerns. To have another meeting? I guess.”

Many residents raised concerns about dangers posed by the increased traffic that the Dollar General will bring to the area.

“We have met with the West Virginia Department of HIghways, sat down across the table and set out plan out and talked through with them what our options would be,” Allen said. “They suggested and we have agreed to put in a left hand turn lane from 522 (southbound) onto Oakland Road.”

Citizens at the meeting raised concerns about an 18-wheel tractor trailer moving in and out of the Dollar General through a proposed Oakland Road entrance.

Allen said that “we have run multiple models of our truck moving in and out of the site and it works without any significant impact to either roadway, especially with the turn lane included in that model.”

Foster “Sonny” Riggs said that he rides his horses on Oakland Road and others run and ride their bikes there. Riggs said there is already enough traffic there and a Dollar General would only bring more.

“My wife and I also walk on Oakland Road and we gather up the garbage,” Riggs said. “I don’t know why people just throw their stuff right out the window. But as you know, they do. We can get all the garbage in that area now with a Food Lion bag. I figure if you guys put this thing in there, we are going to need a feedsack.”

South Morgan residents Harry and Debbie Weiss were not able to attend the meeting, but sent a message that many at the gathering agreed with.

“My wife and I are opposed to the construction of a Dollar General store at the intersection of Valley and Oakland Roads in South Morgan County because there is no value added for our community,” Weiss wrote. “Suffice it to say, no one benefits from the Dollar General except the dollar general corporation itself.”

“We do not believe another dollar general store will be an asset to the citizens of South Morgan County,” Weiss wrote. “A Dollar General store already exists in Berkeley Springs and a short distance south is a  Family Dollar. Four other similar businesses already exist in or near South Morgan County —  Ridge Deli and grocery, J&B Tobacco and Mini Mart, the Cacapon Market and Exxon gasoline station, and the Liberty fuel station in Virginia. How many like establishments are necessary in a six mile corridor? ? Four stores certainly seems to be sufficient for a majority of my neighbors.”