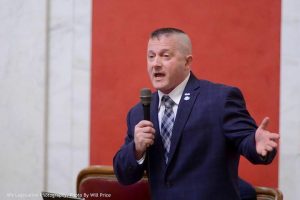 He comes from coal country and represents an area that voted 75 percent for Donald Trump.

At the same time, he’s the legislative hero of the teachers as they enter their third day of a statewide strike (with all 55 counties shutting down the schools.)

And he’s disgusted with the way West Virginia is being trampled on by out of state corporate interests.

Over the weekend, he took to his Twitter feed and put the teachers strike in perspective.

“Hundreds of years ago, investors came to West Virginia and purchased most of the land for all but nothing. Even today, you will be hard pressed to find many people in West Virginia who own their mineral rights.”

“They wanted our salt, timber and coal. They came in, paid our people essentially nothing for it and then put in the railroad. West Virginia has always been a colony.”

“So then you have these West Virginians made up of African Americans from the deep south, Italian, Irish and Mexican immigrants all working to extract our resources but were being treated like slaves.”

“They were paid in script – fake company money – that could only be spent at the company store and you never had enough money to stay ahead of your debt so you always owed your soul to the company store. Always.”

“So our miners decided they wanted to unionize. And they fought and died for that right in one of the largest labor uprisings in the United States.”

“After they were able to unionize, life got better. But the people here were still dirt poor and many were encouraged to not pursue education.”

“Our coal was being pulled from our mountains, shipped to Pittsburgh to make steel and then used to build Manhattan while our people had to travel dirt roads and could barely afford to survive.”

“And don’t get me wrong. The jobs paid well. At one time, Welch, West Virginia was the ‘home of the millionaires’ and it was said it was like going to NYC. But go there now and see what has happened.”

“And as for our politicians? Didn’t matter what party they belonged to. They were all bought and paid for and consistently deterred any chance of new industry.  Why in West Virginia will we fight for our coal industry? Because it is all we have.”

“Now, the same politicians who have sworn to fight for coal miners and coal mining families are selling those families to the highest bidder all because of natural gas and history is repeating itself.”

“You never hear ‘diversification.’ You never hear that West Virginia could be more than an extraction state where our resources are taken, we receive nothing for it and then we are left to clean up the crumbling economy.”

“One of my proudest accomplishments as a state Senator is the West Virginia Medical Cannabis program because I know that it will open a door for a new type of industry in West Virginia.”

“One of my proudest accomplishments of this campaign is sitting down with Ro Khanna and several others from his district and speaking about ways to bridge the gap between Appalachia and Silicon Valley.”

“In West Virginia, we deserve to benefit from the resources that are under our fight. We deserve to have different types of industries that attract new people to come and join our Mountaineer family. Our teachers deserve better. Our communities deserve better.”

“But I also want to see Wild and Wonderful West Virginia be a state with a diverse flourishing economy where young people find themselves anxious to move to. I want to see a state that pays its teachers and public employees more than just a barely living wage.”

“#55 Strong is a movement. West Virginia wants more. They want better treatment by the politicians. They want a government that is not ran by extraction industries where big energy lobbyists get a swipe card to their statehouse.”

“They want a state that actually works to help their lives instead of the lives of big business. They want a government that serves them and not out of state interest groups. They want to be able to stay here. And thrive. #55strong”

“I will end with this. If you have ever found yourself making jokes about West Virginia, our coal miners, our accent or our culture, take a look deeper. Take a look at our strong history in labor and how for decades, we were never given a chance even by our own representatives.”