Columbia Gas is petitioning the National Park Service for a right of entry to build a natural gas pipeline under the C&O Canal west of Hancock, Maryland. 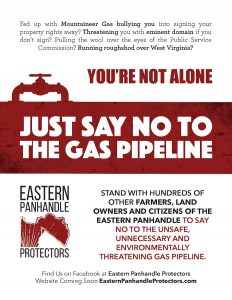 The pipeline would also go under the Potomac River.

Upper Potomac Riverkeeper Brent Walls has registered opposition to the move with the National Park Service and Congressman John Delaney (D-Maryland) who represents the western part of Maryland.

Walls said the National Park Service’s process for a right or entry or right of way is a private process.

He learned about the Columbia Gas petition at a meeting last month with Mountaineer Gas representative Reed Robinson.

Mountaineer Gas is planning a connector pipeline that will take the fracked gas from the proposed Columbia Gas pipeline in northern Morgan County and transport it east across Morgan County to Berkeley and Jefferson counties.

Walls believes that the National Park Service will delay consideration of the petition until Columbia Gas gets approval for the project from the Federal Energy Regulatory Commission (FERC).

Columbia Gas has yet to begin it’s FERC process.

There is growing opposition to the proposed pipelines across eastern West Virginia.

Letters to the West Virginia Public Service Commission protesting the Mountaineer Gas pipeline outnumber those in favor by ten to one (70 to 7).

Walls will address the issue at a public meeting on the pipeline projects Friday October 14 at 7 pm at the Morgan County Board of Education (247 Harrison Avenue, Berkeley Springs, West Virginia 25411.)

[Update: After posting this story, we were contacted by Jenny Anzelmo-Sarles, a spokesperson for the National Park Service. Anzelmo-Sarles said that Columbia Gas had applied for a permit to do survey work in the park. That permit has yet to be granted. The National Park Service is in the process of reviewing it. If it is granted, Columbia Gas would then apply for a permit for access.]