Circa 33 Public House is now open in Berkeley Springs at the corner of Union Street and US 522. 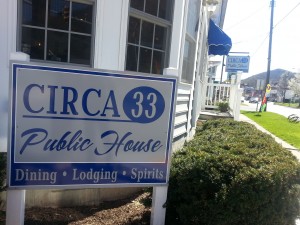 The building that formerly housed Temptations restaurant was purchased last December by Matt Franklin and David Science. They’ve totally renovated it and on Friday opened Circa 33.

By May 1 they plan on being open seven days a week, serving breakfast, lunch and dinner. They are now open 11 to 9. 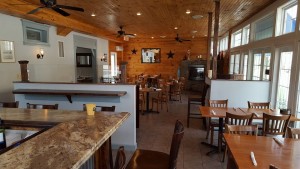 Franklin and Science are renovating four rooms above the restaurant for a bed and breakfast.

They hope to have live music on weekends.

They called the place Circa 33 Public House because they originally thought the building was built in 1933, but in fact it was built in 1929, Franklin said. And 1933 was the year that prohibition was lifted.

Franklin said it’s called a public house because it’s a house with rooms for rent and it’s sort of like a tavern — it’s got a bar that can seat ten.

Science and Franklin had a weekend camp spot the other side of Morgantown they would go to on weekends. They would drive through Berkeley Springs to get there. They always wanted to open up a restaurant and fell in love with the building.

“We put everything we have into this place,” Franklin said. “We intend to live here and we want to keep it open seven days a week.”